Beginning November 20th, the Metropolitan Museum of Art in New York will host a retrospective of the works of Joel Arthur Rosenthal, titled Jewels by JAR. Considered one of history’s greatest jewelers, the JAR exhibition will be the first devoted to a contemporary artist of gems at the Met, and the first time an exhibition of this caliber will take place for a living jeweler.

FT Fashion Editor Vanessa Friedman got a rare opportunity to sit down with JAR over the summer and wrote a great piece (click here to read) that I highly recommend if you want to learn more about the man who she refers to as the ‘Faberge of our time’. 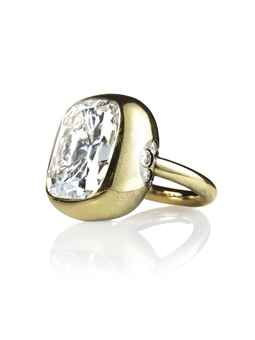 I have known Joel for many years and consider him a good friend. He and my Father had a fantastic relationship, and really appreciated each other for being the best in their respective fields: my father as the premier diamond cutter, and Joel as the number one jewelry designer in the world.

Joel is a total snob while at the same time the ultimate anti-snob. Years back, I called him by the French pronunciation of his name ‘JO-El’ and he admonished me saying he was not French, but was from The Bronx and proud of it! I love that about him. I also love the fact that he does everything on his own terms, never bowing down to a client or the industry.

If you are one of the privileged few who can call yourself a JAR client, you are well aware that no matter how wealthy or important you are (even if you won an Academy Award!) you never question his work or ask him to remake a piece of jewelry. I remember when he recounted stories of a couple of clients who were brave - or foolish!- enough to speak-up, to whom he said he calmly showed the door.

I am the proud owner of a William Goldberg diamond set in a JAR ring. Whenever I wear it I know I am wearing a piece of history, and maybe it will even end up in a museum some day.

Jewels by JAR at The Metropolitan Museum of Art