The global expansion of the ASHOKA® diamond is something that continues to excite me, especially when I get to see its impact first-hand, halfway across the world.

I was recently invited by Grant Partridge to attend the 150th anniversary of Partridge Jewellers, New Zealandʼs premier luxury jeweler for six generations. We began our partnership with the Partridge family in 2013, selecting them as the exclusive ASHOKA® retailer in their small but lively country, or as Grant pointed out, a country that has more sheep than humans! 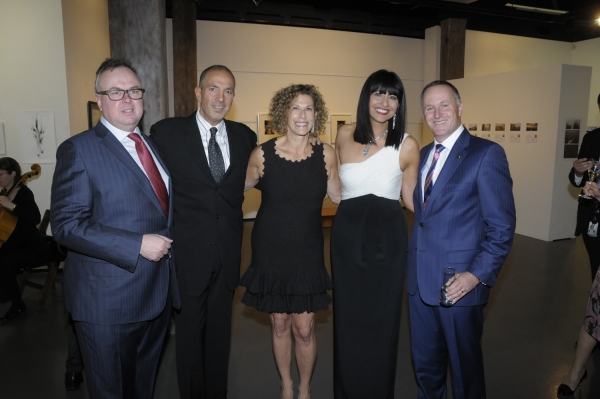 I was appreciative of and intrigued by Grantʼs thoughtful invitation and decided to take him up on it and bring my husband, Neil, along to enjoy the adventure. Our time in New Zealand was packed with wonderful, once-in-a-lifetime experiences, most of which centered around Partridge's two main anniversary events. The first was in Wellington and the second was in Auckland.

While in Wellington, we were thrilled to meet Prime Minister John Key, who ceremoniously placed a silver fern pin, their national symbol, on Neil. We also spent a lovely evening attending a performance by the Royal New Zealand Ballet, and stayed at a lodge once visited by Queen Elizabeth II.

Eve enjoying a brief moment of solitude with her husband, Neil.

Our time in Auckland was equally as enjoyable. I was so excited to have the opportunity to speak about the history and legacy of the ASHOKA® diamond in front of 250 invited guests. I donʼt often speak in public, but the welcome I received could not have been warmer. I also sat down for an exclusive interview with a wonderful writer from Viva Magazine, the popular weekly fashion and lifestyle edition of The New Zealand Herald, which you can read here.

The highlight of the whole trip for me was when Grant, his father, Ray, and his daughter, Nikki, spoke during the festivities. I loved seeing three generations of the Partridge family actively and passionately working together in the family business, each bringing a different talent that contributes to their overall success. It reminded me a lot of my own family and how we have reached the third generation of Goldbergs, who are now carrying on the impeccable business that my father created over sixty years ago.

I want to extend a very special thank you to Grant, his family and his wonderful staff for a truly amazing experience. We hope to visit your beautiful country again very soon!