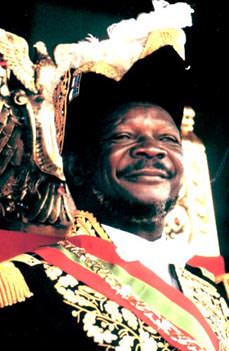 In 1977, Jean-Bèdel Bokassa declared himself the Emperor of the Central African Republic, and demanded a diamond ring from the nation’s leading mining company. What followed was perhaps one of the greatest diamond hoaxes in the last century.

Bokassa became the president of the Central African Republic (CAR) on January 1, 1966, the day after leading a coup d’ète to remove the current president. Originally a member of the French Army, he rose through the ranks and eventually removed the previous president in a calculated bid to rule the small country himself. After nearly ten violent and tumultuous years of presidency, the dictator declared himself the Emperor of what he was now calling the Central African Empire.

As a token of his reign, he requested a great diamond from Albert Jolis, the president of Diamond Distributors Inc., one of the country’s diamond mining corporations. He wanted a diamond that would rival the private jewel collections of other reigning monarchs around the world. It was made very clear to Jolis that a minor diamond, anything smaller than a golf ball, would be considered an insult and treated as such. With a strict, and rumored mad, ruler like Bokassa, this was a serious threat. He stood to lose his company’s mining concession in Central Africa. Jolis had no choice but to deliver the diamond the new Emperor demanded, before his official coronation ceremony.

Unfortunately, the cost of such a diamond was more than he or his company could afford. Jolis needed to come up with a suitable diamond, but how? After some careful thought, he decided to take a calculated risk and gift the Emperor with a rare ‘black diamond’, carefully polished and set into a ring.

Black diamonds, called Carbonado, are exceedingly rare. Fortunately for Jolis, the Central African Republic is one of the two places in the world where they can be found. However, finding a large black diamond of high quality was very unlikely. What was available is an imperfect near-diamond known as boart. Boart (shown left) is black, and it can be polished up to resemble a black diamond, but it’s usually ground down for industrial uses.

The stone that Jolis selected resembled the shape of Africa, a fortunate find. Cleaned up, there would be no way for the dictator to know it was anything other than what Jolin claimed. To add some extra sparkle, he inserted a single carat white diamond into the rock in the approximate location of the capital of the CAR. The entire rock was set into a ring, and Jolis himself carried the ring to Banguri, the capital of the Central African Empire and the location of the coronation ceremonies. A week before the new Emperor’s coronation, a nervous Jolis presented Bokassa with his ring. The emperor loved it, and joyfully showed it off to a room full of his cabinet members, not knowing that his 70 carat black diamond ring, supposedly worth hundreds of thousands of dollars, was really a black rock worth a mere $140 dollars. Even with the inclusion of the white diamond, the ring’s worth barely surpassed $500.

Jean-Bèdel Bokassa’s regime was overthrown two years later, and the defeated ex-emperor fled to the Ivory Coast. His black ‘diamond’ ring was carried into exile with him; Bokassa refused to leave his priceless ring behind. Jolis would later joke that the ring would only be priceless until Bokassa tried to sell it.

If Bokassa ever discovered that his one-of-a-kind black diamond ring was a nothing more than a well-played hoax, it wasn’t until after he was no longer in a position to affect the diamond industry in Central Africa. Albert Jolis remained the president of Diamond Distributors, Inc. until his retirement in the 1980s.

There are many times when the worth of an item is entirely in the eyes of its beholder. To Bokassa, the large chunk of boart diamond was a priceless jewel; to anyone else, it was a rock only worthy of basic industrial use. However, this mostly worthless chunk of black boart fooled a self-proclaimed Emperor and saved a prosperous mining company. Jolis took what could have become a disastrous situation for his company and turned it around to an amazing triumph, with just a bit of creativity and quick thinking.