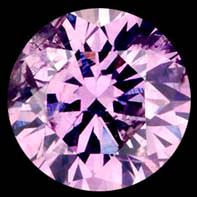 Diamonds come in several colors and shades. Natural fancy colored diamonds are exceedingly rare; out of the approximately 110 million carats of diamonds mined each year, only 2,000 carats are considered gem quality, large or pure enough to be shaped and polished for commercial sale. Of all of the natural fancy diamonds, perhaps the most rare is the pure purple diamond.

Purple is the color of royalty, of courage and honor. For years, it was considered the color of kings, as only royalty could afford the cost of purple cloth for their clothing. Purple heart medals are given to soldiers killed or wounded in action, as a recognition of their bravery and sacrifice. With these lofty associations, it’s no wonder that purple diamonds are considered among the most precious of all diamonds.

Even though natural purple diamonds are very rare, there is a growing interest in purple colored diamonds. The large demand and small supply has pushed prices up to several times the cost of regular diamonds, resulting in prices that are out of the reach of many interested consumers. This has led to an increase in the popularity of much cheaper, but inferior, synthetically colored diamonds. These natural diamonds are exposed to certain types of minerals, chemicals, or even ion beams to change their color. There are also some jewelers who choose to coat diamonds in color to give them the look of a fancy colored diamond.

There aren’t many well-known purple diamonds. The most famous diamonds, of any color, are not only stunningly beautiful, they are also almost always several carats in size. This is another characteristic that sets purple diamonds apart from nearly all other diamonds; it is very rare to find a pure purple, gem-quality diamond bigger than five carats

One of those larger diamonds is the Royal Purple Heart Diamond (shown to the left). Very few details are actually about this diamond. It is a 7.34 carat purple diamond, and is the largest vivid purple diamond in known existence. It is believed to be originated from Russia. The perfectly cut heart shape brings out the true brilliance of this stone, highlighting not only its vivid color but also the startling clarity and brilliance.The second famous purple diamond is even more of a mystery. Called the Supreme Purple Diamond Heart, all that is known about the diamond is that it is a perfect round cut and its size falls between two and five carats. It is said that the various shades of purple in this gem can be seen as a viewer looks at the stone from different angles, one of the reasons why this particular diamond is so popular, despite its small size.

Pure purple diamonds are ideal for engagement rings, anniversary jewelry, and as a part of a wedding band. Their color speaks of romance and loyalty. With their stunning color and intense beauty, it’s no wonder why they are some of the world’s most sought-after gems.