Famed Hollywood agent Jim Toth recently proposed to Oscar winning Actress Reese Witherspoon with a rare four-carat Ashoka diamond engagement ring by William Goldberg.  Completely smitten by his new fiancé, Jim chose this patented cut to serve as the token of his love for Reese, because he was drawn to the beauty and history of this rare diamond.

The Ashoka diamond by William Goldberg is one of the most coveted stones in the world.  Its flawless cut is inspired by the famous 41.37-carat diamond, mined in the Golconda region of Southern India, and owned by Buddhist Emperor Ashoka Maruya.  The historic diamond served as a talisman for people of India, as the Emperor worked to instill love, harmony and compassion among his followers.  The legendary stone was believed to have mystical powers, including ability to instill positive feelings.  It has since achieved tremendous fame and has passed through the hands of many astute gemstone collectors.  Inspired by not only this lore, but also by the flawless beauty of the original remarkable diamond, William Goldberg has recreated the stunning diamond cut.

The William Goldberg Ashoka diamond is extremely rare and recognized as one of the world’s most desired gemstones; less than 10% of diamonds mined annually can be cut in such a way. With 62 facets and elegant rounded corners, the remarkable stone resembles an elongated cushion cut and offers an elegant and classic appeal.  Because 40% - 60% of the rough diamond will be cut away to create the unmistakable light and fire that comes from an Ashoka diamond, diamonds of fifteen carats or more are required, and less than 200 of these stones are discovered each year.

Reese and Jim have been dating just less than a year, but a close friend of Toth’s told People Magazine that, “"Jim knows Reese is the one for him, it's what he's been waiting for, this is a natural step for him.”  In fact, Toth has become so smitten with Reese that he was instantly drawn to the beauty, rarity, and legend of the famed William Goldberg Ashoka diamond, and he worked directly with the jeweler to create the perfect custom-designed diamond engagement ring.

As reported in a recent article by Francesca Ferrante, Eve Goldberg, co-owner of the William Goldberg Diamond Corporation, commented on the design of Rees’s ring. “In the past year, the retro look in diamonds has been very popular,” she says.  Reese’s Ashoka diamond engagement ring is a “very elegant cut and has an old feel to it.” 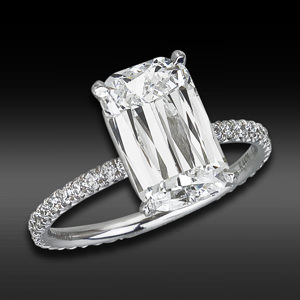 Jim wanted a ring that was as beautiful and dazzling as the love of his life, and Reese’s diamond ring does prove to be as stunning and graceful as she.  The flawless center stone exudes elegance, offers vintage appeal, and is set on a platinum and pave diamond band.  Reese is not the only celebrity adorned with the dazzling William Goldberg Ashoka diamond, the beauty of this diamond has enchanted many famous stars; including Oprah Winfrey, Sharon Stone, Penelope Cruz, and Debra Messing.